Students Give Back through Eagle Scout Projects

There are many ways to volunteer and make a difference at Catholic Charities of Northeast Kansas. Three Boy Scouts did just that this summer through their Eagle Scout projects. 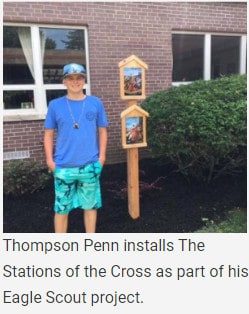 Thompson Penn, a freshman at Rockhurst High School, regularly helps load the Catholic Charities truck with food donations at Ascension parish. He also sorts clothes at Catholic Charities’ TurnStyles Thrift Store from time to time. So when it came to choosing his Eagle Scout project, Thompson knew he wanted to do something for the organization that does so much for others.

Thompson took on transforming the overgrown courtyard at Catholic Charities’ Kansas City, KS offices and Emergency Assistance Center. He trimmed and removed unwieldy plants, planted new shrubs and mulched. In addition, he added a personal touch to the landscaping, installing what has become a Lenten tradition in his family — the Stations of the Cross.

Like Thompson, Paul and James Masoner have been active volunteers with Catholic Charities. Paul, a sophomore, and James, a junior, at Bishop Miege High School, help sort food at Hope Distribution.

“I decided to reach out to Catholic Charities for my Eagle Scout project because I wanted to help the less fortunate through my faith,” says James. 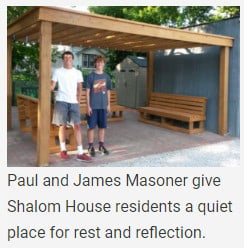 For their Eagle Scout projects, the brothers chose to repair and renovate the outside area behind Shalom House, Catholic Charities’ men’s shelter. James led a team of Scouts, building and staining three new benches for the patio.

Paul and his team followed-up, taking apart the deteriorating pergola above the patio. After re-staining the corner posts, they built a new slat-structure to provide a peaceful, shaded area for the men.

“Thanks to the efforts of these young men, we can now utilize these outdoor spaces, providing areas of prayer, solitude and reflection for those we serve,” says Ken Williams, Catholic Charities’ President and CEO.