Afghan refugees walk to a bus taking them to a refugee processing center upon their arrival at Dulles International Airport in Dulles, Virginia, Aug. 25. (CNS photo/Kevin Lamarque, Reuters)

MISSION — The recent images of chaos and desperation in Afghanistan have stirred in Catholics across the country a desire to help — Mary Patterson, a member of St. Pius X Parish here, among them.

When she learned that Catholic Charities of Northeast Kansas needed help assisting refugees they would soon resettle, she wanted her parish to be involved.

“We had been praying at Mass for the Afghan interpreters who worked with the United States,” said Patterson, an adjunct instructor in chemistry and biology at Kansas City Kansas Community College.

“Then, when we found out they were coming to the United States, I emailed [pastor] Father Ken Kelly, our parish office manager LouAnne Wagner, and our maintenance manager Patrick Barron,” she continued. “I asked them if we had any storage space to start gathering [things] for the refugees. We decided to put boxes out to start collecting items.”

The parish doesn’t have room to collect furniture, but they are able to collect other items: hats, coats, blankets, sheets, towels, pillows, cleaning supplies, kitchen utensils and other items. These things will be transported to a Catholic Charities collection point.

“The refugees don’t have anything — maybe a suitcase of clothes, if that,” said Patterson. “They’ll be starting from scratch. Catholic Charities will work to get them housing and we will try to furnish those apartments with donated items. They don’t have money to buy items.” 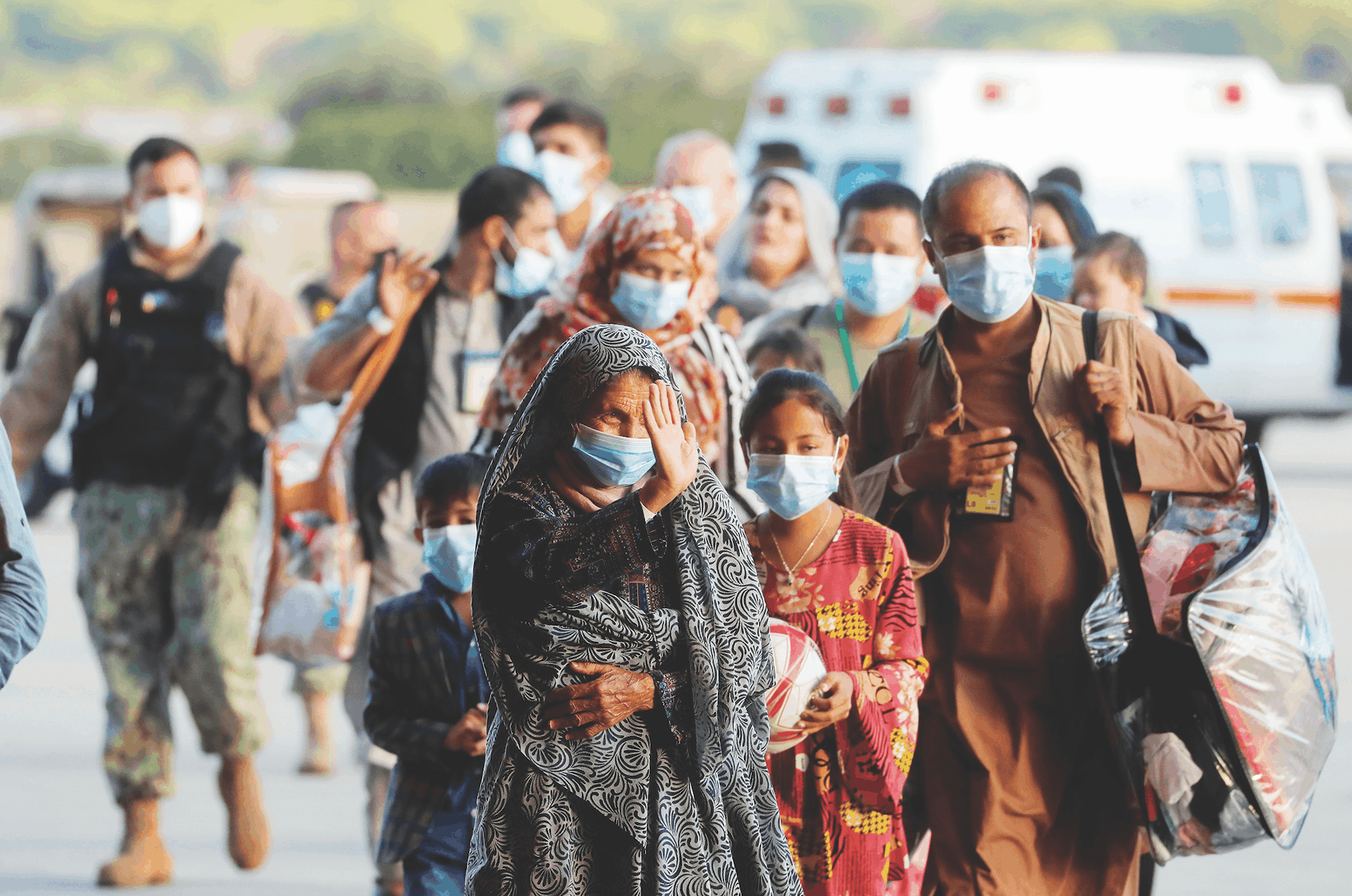 “I already see stacks of [items] in the vestibule of the church, and I see volunteers moving stuff . . . to Catholic Charities,” he said.

“The very definition of Christianity is to help out those in need and never to ask what is in it for us,” he added. “We reach out simply because the need is there, and so we help.”

Both Father Kelly and Patterson recall how Catholics throughout the archdiocese helped refugees from South Vietnam when it was conquered in 1975.

“I’m sure we’ll do the same thing again to help those coming to our country as we helped the Hmong in 1975,” said Father Kelly.

Nor was he surprised that Patterson took the lead.

“She’s a standout volunteer for our parish,” said Father Kelly. “She’s come to the plate many times over the years to help [the parish] do worthy things. I feel great about her leading the charge on [assistance] to Afghan refugees for St. Pius Parish.”

Families on the way

The U.S. Conference of Catholic Bishops (along with the various diocesan Catholic Charities agencies around the country) is working with the U.S. Office of Refugee Resettlement to assist some of the estimated 95,000 Afghan refugees who will eventually come to the United States.

There are two types of Afghan refugees.

The first are those with a special immigrant visa. The SIV families have permanent status and may participate in various government assistance programs.

The second are asylum-seeking evacuees. They may receive a one-time grant of $1,200 but aren’t eligible to participate in government programs like the SIV families. The latter kind of refugees is the most in need.

“We have pledged to take 75 individuals at CCNEK,” she said. “That’s our initial number. It’s very highly likely that will be doubled.” 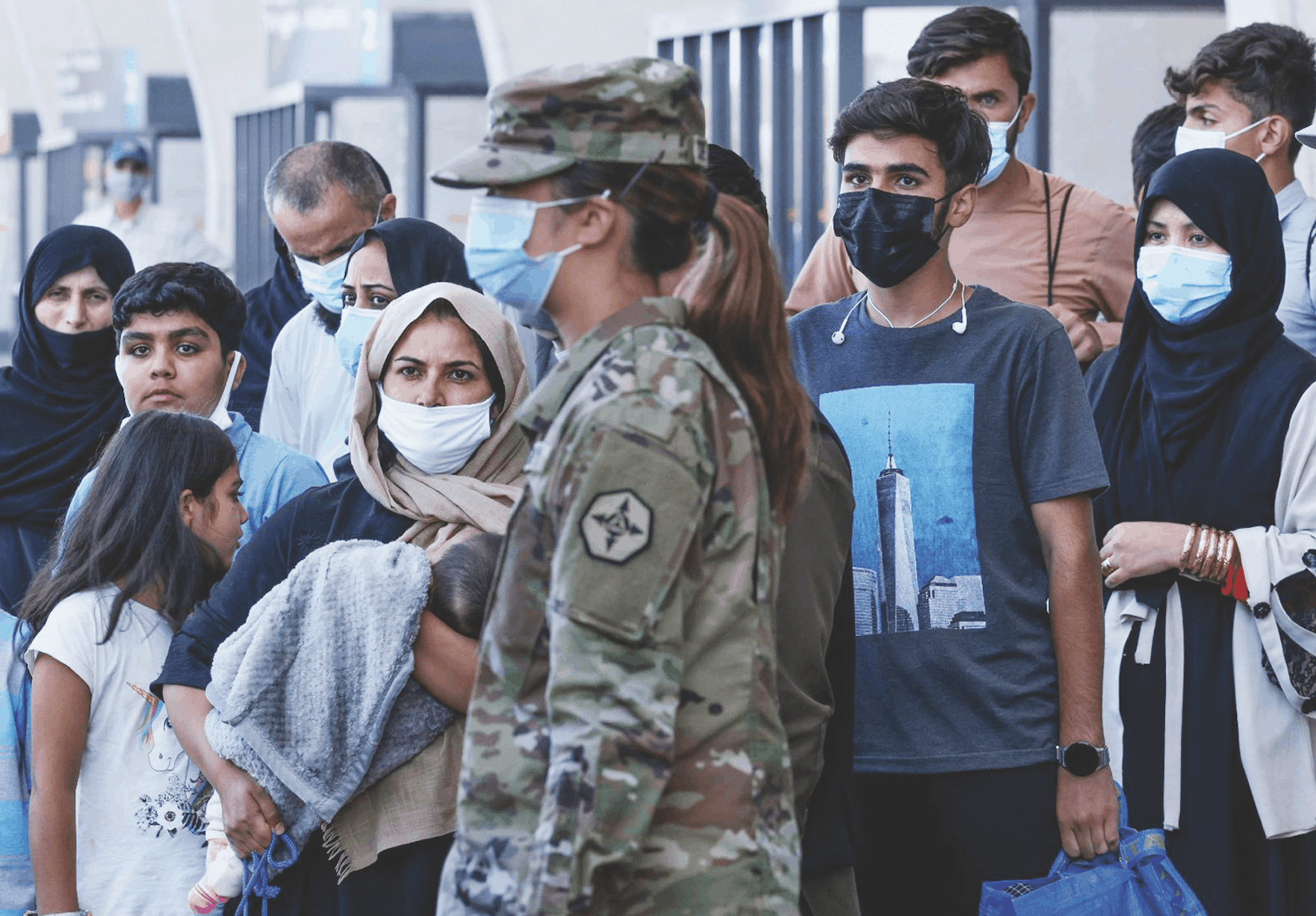 Afghan refugees at Dulles International Airport in Dulles, Virginia, wait to board buses that will take them to a processing center Sept. 2. CNS PHOTO/EVELYN HOCKSTEIN, REUTERS

Refugees from other places are arriving weekly, but the exact date when these refugees from Afghanistan will arrive is unknown. CCNEK expects to be given 24- to 48-hour notice that they are on their way.

Lukes expects that, like other refugee groups, these from Afghanistan will be categorized either as “primary refugees” since they’re being resettled directly from their home country, often because they have some local tie, or as “secondary refugees” — those who have first settled somewhere else in the United States but move here to be with a friend or relative.

“We anticipate Afghan evacuees to be arriving in late October,” said Lukes. “We expect that to be a heavy influx of people arriving in a short span of time. That’s related to them currently not able to travel until they are a certain number of days out from a vaccine they are given. Some of the people we had slated to come already were canceled and will come late October.

Ways and means of helping

There is a list on the Catholic Charities website of items that organizers expect the refugees will most need (see sidebar).

“Primarily, we are looking for things to furnish a home,” said Lukes. “Coffee tables, couches, chairs, dishes, silverware — things like that. We are open to winter items like coats, hats, scarves and gloves so we can have them on hand so when families arrive during the colder weather, we can give them that immediately. We are asking all other clothing be given to TurnStyles Thrift Store, which is also run through Catholic Charities.”

Items that are collected at churches, schools or homes can be taken to  Shalom House, 2100 N. 13th St., in Kansas City, Kansas. The only time donations can be accepted is between 3-6 p.m. on Wednesdays. Catholic Charities might expand days and hours later.

A form to give monetary donations online can be found on the Catholic Charities website (see below). Donors can also send checks to two places. The first is: Catholic Charities of Northeast Kansas, 9720 W. 87th St., Overland Park, KS 66212. The second is Kasey Featherston, 600 Minnesota Ave., Kansas City, KS 66101.” Write “Refugee” on the memo line of the checks.

How to give and volunteer

If you are interested in donating or volunteering, contact Catholic Chari- ties of Northeast Kansas by email at: refugees@catholiccharitiesks.org.

For more information, go online to: catholiccharitiesks.org/Afghanistan-humanitarian-crisis/. Scroll down the page and click on the following links to donate items or make financial do- nations online:

• To schedule the drop-off of donated items, send an email to: refugees@catholiccharitiesks.org.