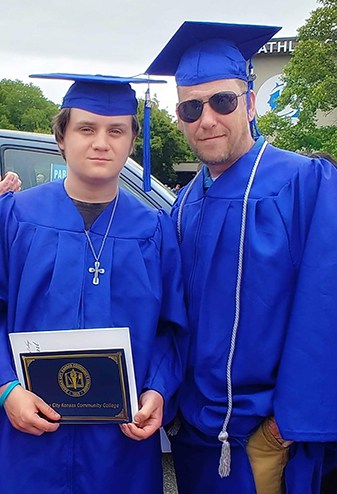 Brent, age 40, was raised on a farm in Basehor, KS. Like many hard working families, both of his parents worked full-time jobs. Growing up, Brent spent many hours with his grandparents. His grandfather was his role model, and would be instrumental to a major decision Brent would make later in life.

After high school, Brent worked in the construction and iron works industry, learning a variety of on-the-job trade skills. Even though his skillset was in demand, his lack of technical education and trade certification held him back from earning a livable wage. After 12 years as an iron worker, earning meager wages and no benefits, Brent decided it was time to go back to school.

One of the root causes of poverty is unemployment, or in Brent’s case, underemployment.

Brent first learned about Catholic Charities and the St. Rita program when he met with a counselor at Kansas City Kansas Community College (KCKCC). The St. Rita program is designed to help remove barriers for those motivated to change their life and break the cycle of poverty by offering participants the opportunity to enroll in classes and earn a trade certification in a high-demand skilled labor profession. In addition, they receive the equivalence of a financial scholarship to help cover the costs of childcare, transportation, food, rent and utilities while completing their education.

As part of the application process, Brent chose his grandfather – his lifelong driving force and motivation — to write an essay on his behalf. Following his acceptance, he enrolled in the HVAC program, and within 11 months, earned his universal certificate. In addition to challenging coursework, he attended the required soft skills training and financial literacy education to maintain his scholarship. Brent excelled in the program, graduating with honors. In fact, he found himself with multiple job offers, securing employment before graduation. “That was a great feeling. I felt like I was in the driver’s seat,” he said.

Unfortunately, Brent’s grandfather would not live to see him graduate. But the experience resulted in another great memory. Brent’s son, Tristan, graduated alongside him earning an Automotive Technician certificate. “My greatest moment was walking with my son,” he said. “Just to share that experience with him was very special.”

Brent now earns a livable wage and receives health benefits and 401k. His employer has also committed to help pay for his Master Mechanics certificate. In Brent’s words, “Everything is great. I am now working full time for a job I love, doing what I love. I don’t know where I would be without the St. Rita program.”