On January 18, 2020, over 1,700 supporters gathered for a glamorous evening gala which raised funds benefiting Catholic Charities Foundation of Northeast Kansas. 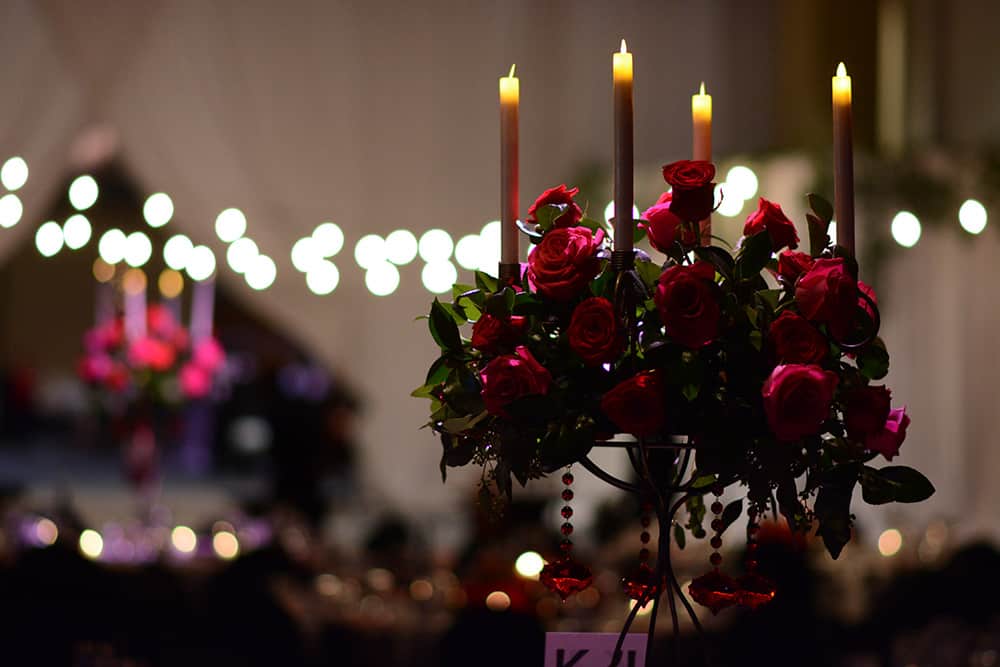 Supporting a Good Cause

Snow Ball began more than 40 years ago as a friends-and-family potluck supporting Catholic Charities of Northeast Kansas. Over the years, it blossomed into a major event and is now the premier single-night fundraiser in the Kansas City area.

This year’s gala, the 46th Annual Snow Ball, raised over $3.1 million which will support Catholic Charities of Northeast Kansas’ work across our 21-county service area. As this year’s Snow Ball presidents, Mike and Jo Kuckleman, emphasized, this money is put to very good use: ninety-one cents of every dollar goes directly into programs supporting those in need. “While they will help anyone out of a crisis, Catholic Charities is committed to helping avoid a future crisis through skills training, financial education and employment. It is truly a hand-up, rather than just a hand-out, mentality at Catholic Charities,” said Jo Kuckleman during her opening remarks. 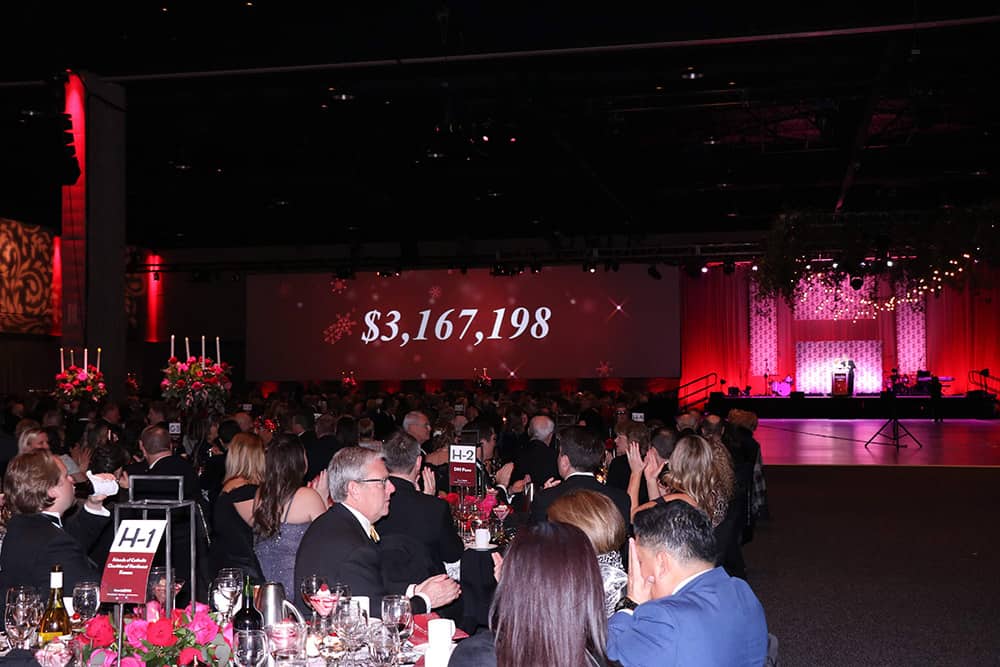 Hard Work for a Stunning Gala

The 46th Annual Snow Ball was a great success, and none of it would have been possible without the hard work and support of over 80 leaders in our community who volunteered their time and talents by serving on the Patron and Table Committees. These hardworking committees were chaired by John and Mary Campbell and Joe and Melissa Valenciano, respectively.

Catholic Charities extends a warm thank-you to Snow Ball presidents Mike and Jo Kuckleman; Honorary Presidents through the William G. McGowan Charitable Fund; David and Mary Caffrey and Mark and Sarah Fortino, who co-chaired the St. Martin of Tours supporting event; Donna Teahan and Joane Wilkerson, who co-chaired the Reservations Committee; and Bill and Mary Walker, who were honored with the First Dance. Thank you as well to all hosts and attendees at the Parish Initiative Parties and the Snowflake Young Adult Happy Hour.

In addition to these Snow Ball leaders, Catholic Charities thanks all attendees, volunteers, and staff who came together to make the 46th Annual Snow Ball possible.

If you are interested in serving on a committee for next year’s Snow Ball, please contact our Event Manager, Theresa Gaul, at tgaul@catholiccharitiesks.org 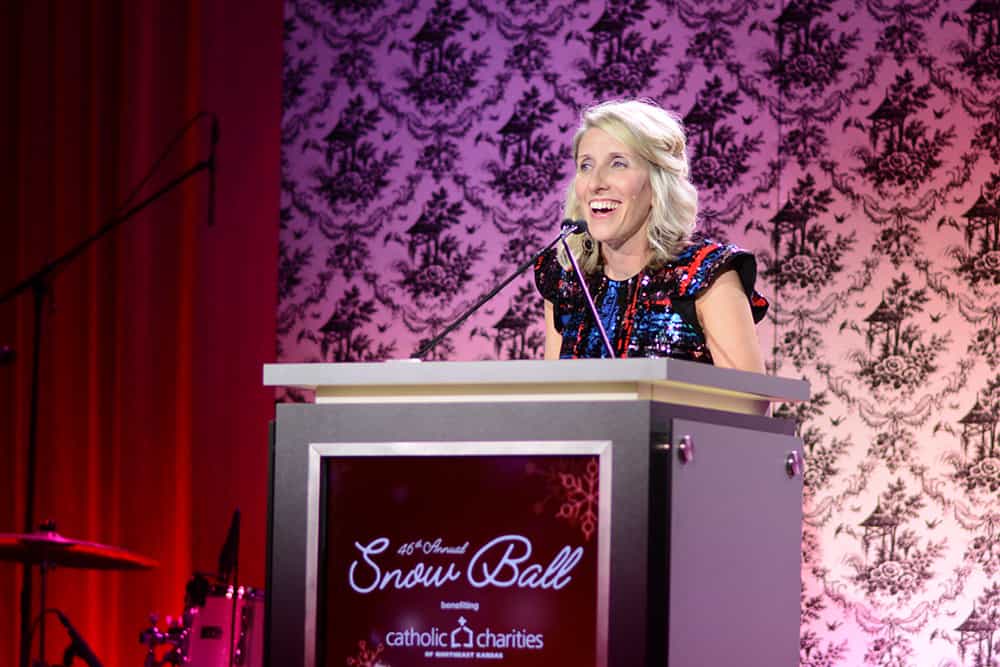 Catholic Charities CEO Lauren Solidum provided opening remarks and thanked those who made the 46th Annual Snow Ball a success.

A Story of Hope

Every year, Catholic Charities of Northeast Kansas shares a story highlighting the real people who are helped by our programs. This year, adoptive couple John and Kami shared their journey to parenthood and their experiences with our Adoption ministry. We were honored by their presence at Snow Ball and their courage in sharing their story. Watch the video produced by Sistine Films below.

After an initial reception, the evening’s program began with opening remarks and an invocation. Guests were then served dinner and enjoyed hours of entertainment by the Lost Wax band. 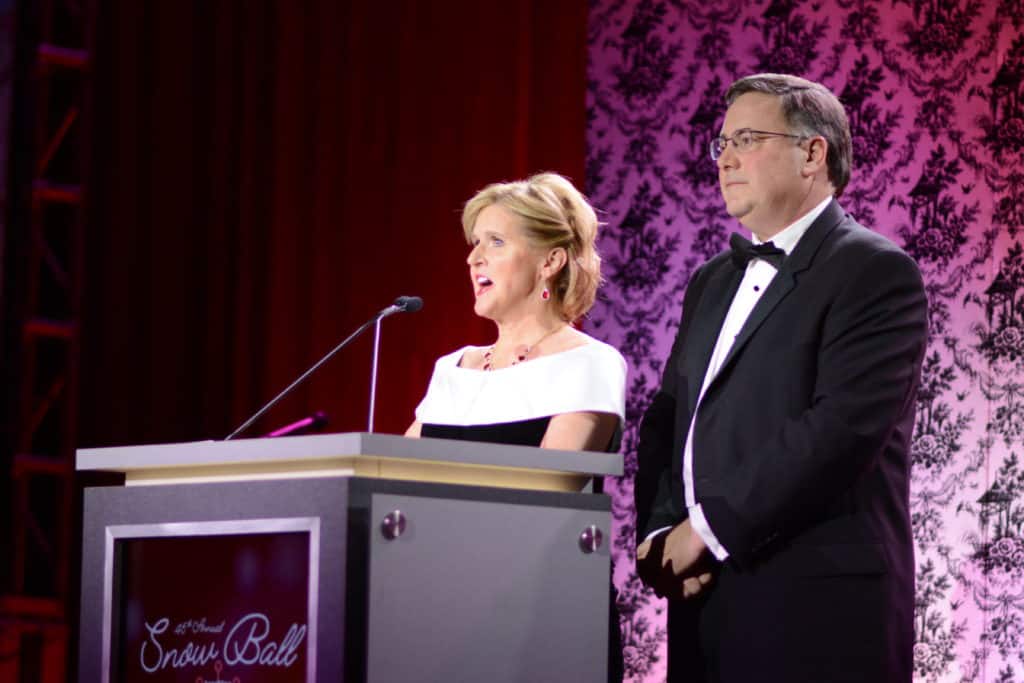 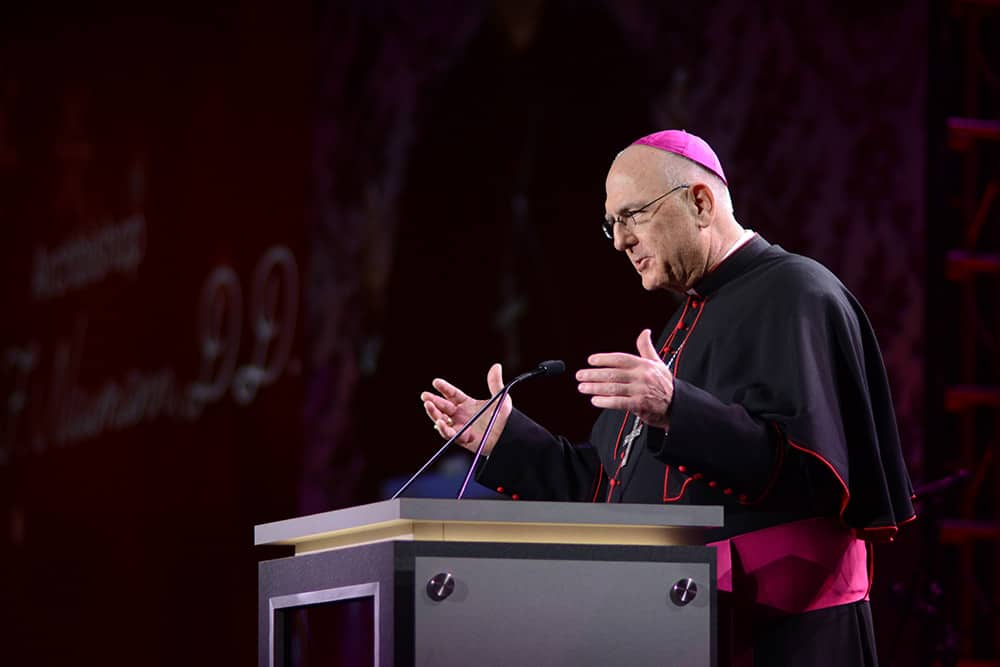 Archbishop Naumann of the Archdiocese of Kansas City in Kansas shared the impact of Catholic Charities and led the attendees in prayer. 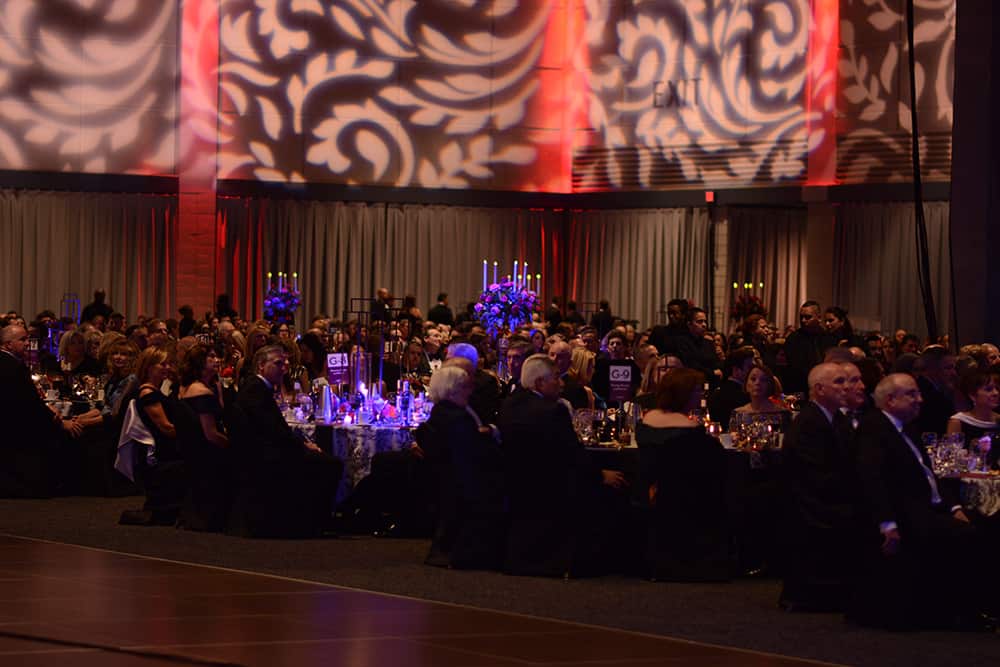 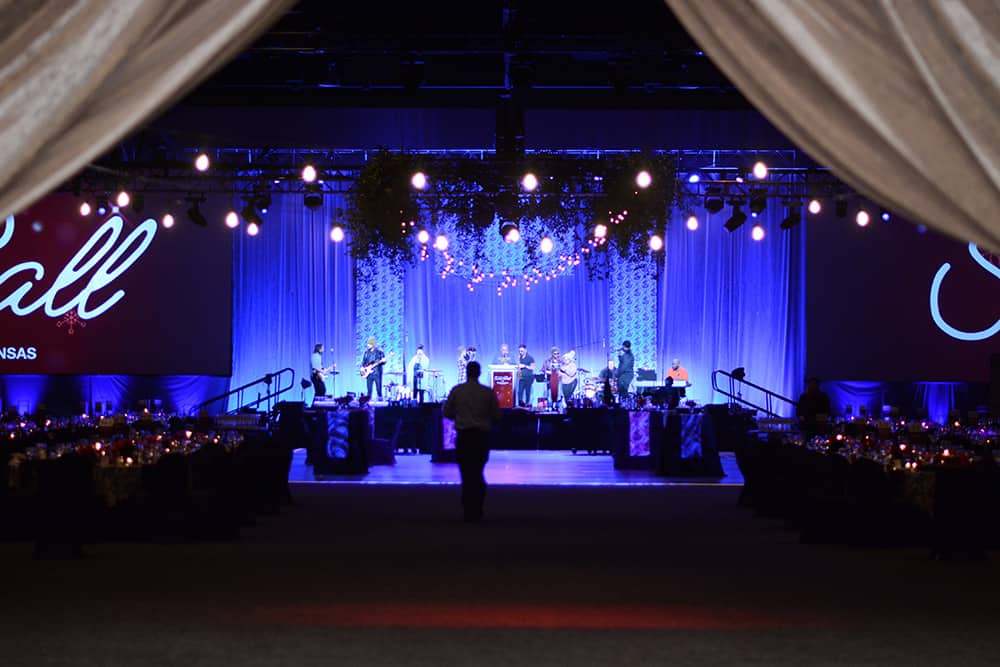 This year’s theme was English Countryside Garden, and the ballroom was decorated with red, black, and pink florals 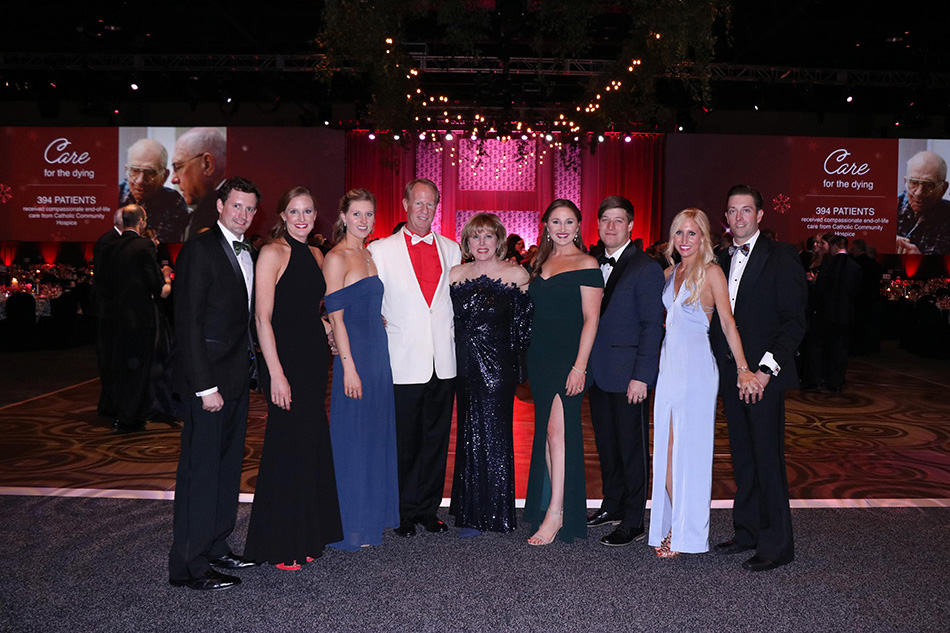 The Reardon family was among the 1,700 guests at the 46th Annual Snow Ball 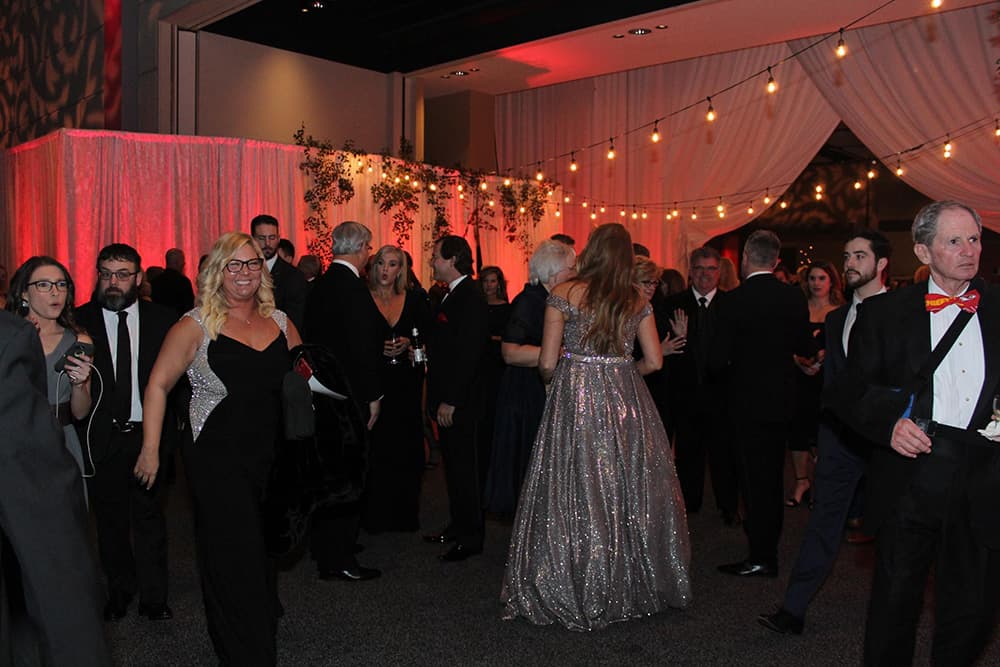 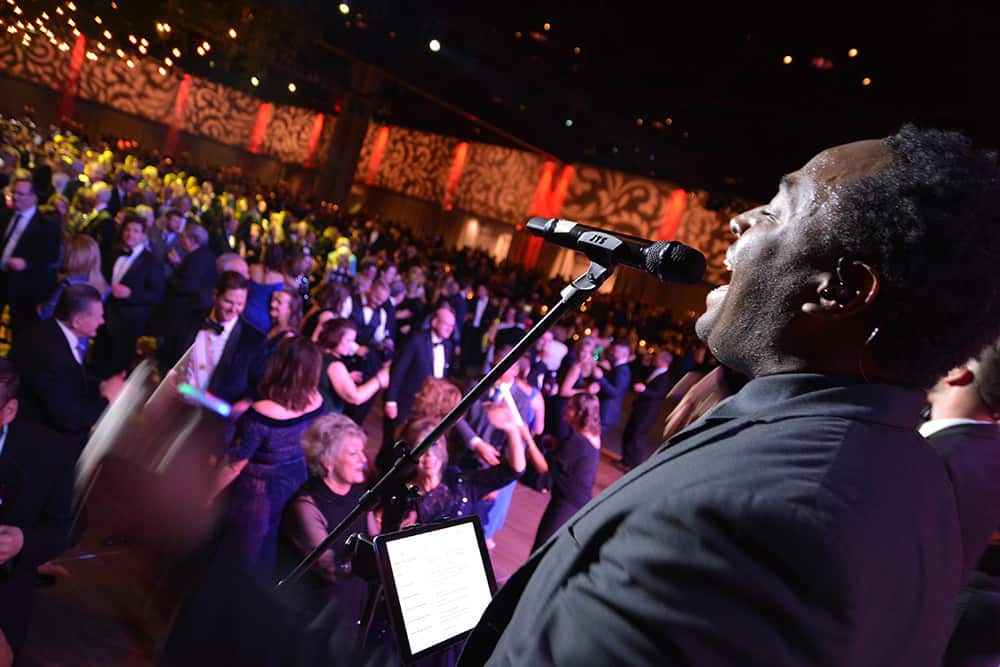 The dance floor was popular, and guests enjoyed the music until the late hours of the evening.

All attendees had the opportunity to have their photos taken at the step-and-repeat. Those photos are available here.

Next year’s gala, the 47th Annual Snow Ball, will take place on January 16, 2021. It will be hosted by presidents Craig and Karen Gaffney. We hope to see you!

Story by Shaylynn Rackers for Catholic Charities of Northeast Kansas