Ram Rai, a refugee from Bhutan hosted by Catholic Charities of Northeast Kansas, was featured in a July 11, 2016 video report by the U.S. Health & Human Services department titled “#RefugeesWelcome: A New Life, Opportunity and Business.”

I was born in Bhutan, very far from here. My family was part of a Nepali ethnic group and because of political persecution and civil war in Bhutan, my parents had to hide in the jungle. We finally fled to Nepal. But the Nepal government was suspicious of the Bhutanese refugees and wouldn’t let us live freely.

I was just 8 years old when I came to the refugee camp in eastern Nepal. It was horrible. We survived with very little food and water. Health conditions were very bad, and people were dying.

When the United Nations refugee agency came to the camp, they started helping us, and our health began to recover. But we lived in the camp for 18 years. Because we weren’t allowed to get identity cards, we couldn’t get jobs outside the camp. So we felt pitiful and meaningless and useless.

We did not want to live as refugees forever. We wanted a new life and opportunity. We tried to get repatriated to Bhutan first, but we weren’t allowed back. So we applied for resettlement by the United States. We were resettled at different times—I arrived in the U.S. in 2008 alone, when I was 21.

I felt so nervous and for one week I was very quiet because I didn’t know anybody else in Kansas City, Kansas. But I was helped by Catholic Charities of Northeast Kansas; a caseworker showed me how to take the bus, get a job, go to the store and learn English. So after that, I felt a little better. And I was very happy to be reunited eventually with my family.

When we arrived in Nepal as refugees, there was nobody to help us. But when we came to the United States to resettle, we got beautiful care from the resettlement agencies.

I worked at a meat plant, a restaurant and a plastics factory. When I was able to take some vacation and visit a friend in Baltimore, we saw a Nepali market. I was excited and a friend and I started the R.G. Asian Store in Kansas City in 2012. I was so happy and I thought that I’m now a businessman in the United States! When I was in the camp, I didn’t have anything, not even enough food to eat and live healthily, so when I became a businessman, opening this store, I felt very, very happy.

I have customers from many different countries, from Nepal, Burma, India, United States, Africa and Mexico. In my store, it is a lot of work, but I love to do a lot of work. And this is my business.

Last year, I went to Nepal to help earthquake victims and to marry Tara, my business associate who exported food to my company.  She’s joining me here soon.

I feel good and proud here in Kansas City, Kansas, in the USA, because I have my identity, I have my passport, I have my citizenship, and I even have my own business.

I’m honored to share my story in recognition of World Refugee Day. I encourage you to join the conversation online and share your story using #RefugeesWelcome. 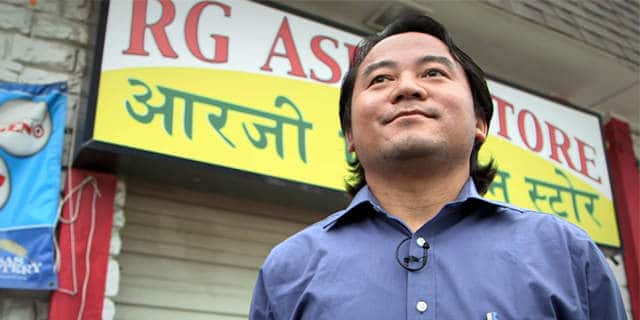 The HHS Office of Refugee Resettlement was established by the Refugee Act of 1980 to help refugees integrate into their new communities in the United States and become self-sufficient.Catholic Charities of Northeast Kansas, an affiliate of the U.S. Conference of Catholic Bishops, works with ORR to help refugees achieve self-sufficiency through cultural orientation, job development, financial assistance and other services.