Over 45 years ago, the first Snow Ball event was held. The volunteers and donors just didn’t know it at the time.

This year’s Snow Ball will be a stark departure from the first event in 1974 that was instigated by John Phillips and John Fogarty and at the time was called the St. Martin of Tours Gala. The event began as a $25 per couple potluck with friends and family, each bringing covered dishes to the former Glenwood Manor Hotel in Overland Park.

During the first four years the St. Martin of Tours Gala raised more than $50,000, and by 1981, when the event moved to the former Alameda Plaza Hotel, it was well known and sold out by mid-December. The proceeds raised began to almost double each year after that. The mission of the gala, however, had remained crystal clear to all those involved: to raise funds to support our brothers and sisters who are in times of need. 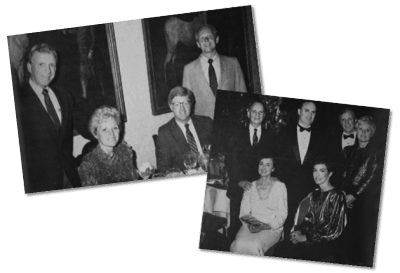 Inevitably each year, snow would fall around the time of the gala, sometimes on the evening of the affair. Because of the fluctuating weather changes in the Midwest, it took only a few years for it to be nicknamed Snow Ball by Phillips, one of the founders. The nickname stuck and finally after several years, it was officially given the name of Snow Ball.

By 1988, the event took another turn by seeking additional monetary gifts in addition to underwriting the cost of producing the ball. Organizers desired to have funds generated by Snow Ball ticket sales to cover the cost of the event, and added an additional giving opportunity, a Patron Gift, that would be a 100 percent tax deductible gift. In following years, efforts focused on introducing the event to the younger generation. 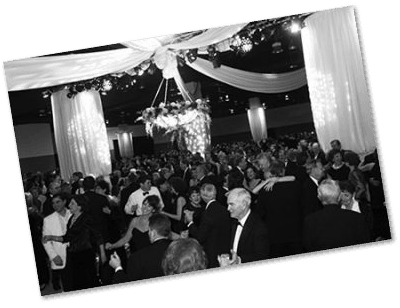 As the guest list grew, Snow Ball moved again to the Hyatt Regency, now the Sheraton Crown Center. The new location brought an even more elegant style to the festivities including valet parking, a cocktail reception, and at one time a Sunday Mass the morning after the Ball for those who stayed overnight at the hotel. The net income exceeded $104,000 the first year held at the Hyatt and by 1994, the cumulative total for the first 20 years reached just over $1 million dollars.

Snow Ball returned home to Kansas in 2017. Since then, nearly 2,000 patrons attend the event year-after-year at the Overland Park Convention Center. It has raised over $3 million consecutively for the last three years. Unlike most galas, all funds are raised prior to the event. The evening is truly a celebration of the generosity of the community.

“Don and I have been to numerous black-tie events over the years, I have to tell you out of all of them, Snow Ball is the most fun,” said Patty Kincaid. She and her husband, Don, served as honorary Snow Ball presidents.

Like many, the Kincaids have made attending Snow Ball a family tradition. When they initially went, their seven children were intrigued. “The girls were in awe that we were getting dressed up,” Patty said. “Now, every one of our children have gone to the event. Like us, they look forward to it!”

Since its founding, Snow Ball has become one of the largest philanthropic galas in the Kansas City area. It has raised a total of $39,143,879 in support of Catholic Charities of Northeast Kansas and delivered on its overall goal to serve and help those in need within the community.

It has become more than an annual fundraising event for those who give their time, talent and treasure each year. Snow Ball is a ministry – one that impacts more than 20 programs and services offered by Catholic Charities.

“I am absolutely amazed by the selfless act of giving from our Snow Ball leadership,” says Lauren Solidum, President and CEO, adding, “Snow Ball helps advance our mission and allows us to help individuals and families move into a more hopeful situation.”