Every country has its own unique language, but one universal language is spoken, or rather sang, among all cultures. That language is music.

For three weeks, Bach to Rock hosted over 40 refugee children ranging in ages from four to 18. Camp activities included teaching the students vocal lessons and how to play hand drums, shakers, bells, piano, bass, guitar, floor drums and other instruments. 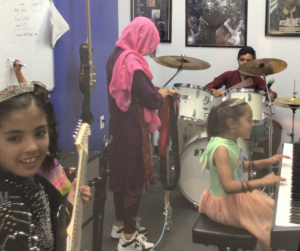 Most of the refugee children spoke little to no English and required a translator. However, once the students got instruments into their hands, the language barrier did not seem quite as large.

“Every camp student is nervous or shy on their first day, but you can start to see their smiles and hear their laughter once they start to perform,” said Angela Hill, Site Director and Owner at Bach to Rock – Leawood.

In addition to instrumental lessons, students participated in afternoon dance parties to popular group dances such as the “YMCA,” “The Chicken Dance,” and “Cupid Shuffle.” The children also made their own rock-band t-shirts and homemade guitars during an arts and crafts hour. Each day a delicious Halal meal was provided.

Classic, easy-to-learn songs such as “We Will Rock You” by Queen and “The Lion Sleeps Tonight” by The Tokens were performed at the end of each week, as the students put on a final concert performance for their parents and Catholic Charities’ employees and volunteers.

“The final performance was so sweet. It made the kids so happy and it was so special to see that,” said Aimée Perera, Refugee Education Coordinator at Catholic Charities of Northeast Kansas. 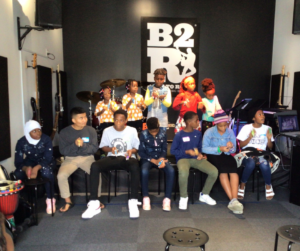 Aimée helped coordinate the logistics for the entire program and even served as a translator one day, using her phone to communicate with an interpreter. Kitoko Ekela, a Services for Older Refugees (SOR) Specialist, and Hayden Swanson, a Refugee Youth Mentoring Program Specialist, also provided transportation services to help drive the students to the program each day.

Acclimating to a new culture, customs, and learning a new language can be an uphill battle for refugee children, but our RSI program provides refugee students with opportunities beyond summertime camps and activities to help ease them into an American way of life.

Throughout the year, the program offers English as a Second Language (ESL) education, after-school and summer tutoring, interpretive services, and case management to help better equip refugee youth with the skills needed to successfully integrate into a new environment – in and out of the classroom.