Feeding Children Across Kansas: A Focus On Our Kids’ Summer Food Program

According to Feeding America, which tracks food insecurity in the U.S., the number of children facing hunger rose significantly during the pandemic – from more than 10 million in 2019 to nearly 12 million in 2020. 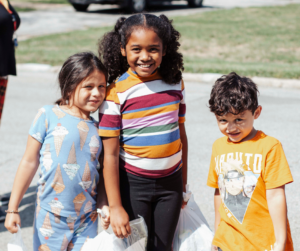 Catholic Charities’s Kids’ Summer Food Program has been working to combat this epidemic of child hunger by feeding children across the state of Kansas. Since 2015, our USDA-funded program has provided healthy meals for thousands of children and teens, when school is out of session.

From June to mid August the Kids’ Summer Food program distributes meals to children, ages 18 and younger, at 27 locations across Kansas City and rural Kansas. These meal sites are set up at locations such as libraries, schools, and churches. Due to the pandemic, Catholic Charities now also offers grab-and-go meal options at some of these sites, in addition to a bus route that travels around Kansas City, Kansas.

The grab-and-go meal options and KCK bus route have allowed us to increase our capacity and touch the lives of more children. This summer, Catholic Charities distributed 48,524 meals to children in Kansas. Nearly 14,575 of those meals were distributed through the KCK bus route alone.

More About Our KCK Bus Route

On Tuesdays this summer, the bus route delivered lunches to children living in and around these neighborhoods. Every lunch complied with USDA meal regulations for children, which require two fruits/vegetables, one grain, one meat/meat alternative, and milk. Meals were shelf-stable, with options like PB&J, wheat crackers, sunflower seeds, applesauce, 100% juice box, and milk. On Fridays, the bus route delivered fresh produce. 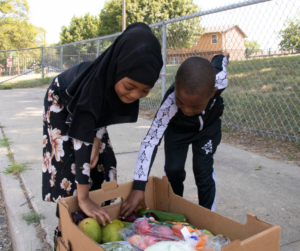 Volunteers were essential in helping distribute the food along the KCK bus route. Volunteers tracked the number of meals distributed, greeted children and parents, and served food to the children. Sometimes, even adults who live at the housing sites jumped in on the action!

Some homes are located much farther from the bus route than others, and it can be difficult to carry a heavy meal or fresh produce box in the late summer heat. Mohammed, a man who lives at one of the housing sites, helped deliver meals and fresh produce boxes to families that needed help carrying their food back home. He also helped knock on peoples’ doors to let them know that the bus had arrived in the area.

Join Us in the Fight to End Child Hunger

Due to short staffing and supply chain issues, volunteers and donations are very much needed to support this program every summer. “They are also critical to expanding our reach to communities that do not provide federally-funded meals to children,” said Chanel Griffin, Catholic Charities’ Food and Nutrition Coordinator.

Your support for this program would mean the world to us. If you are interested in becoming a volunteer next summer, or want to learn how you can donate to this cause, click here.