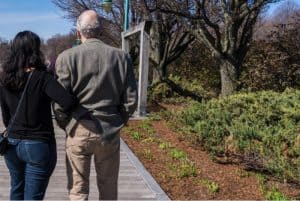 It had been awhile – 40 years in fact – when Dave placed his newborn daughter for adoption through Catholic Charities of Northeast Kansas. That’s why a private Facebook message caught him by surprise.

Last spring, Mandy, an adoptee, reached out to Catholic Charities for a copy of her adoption record. She was interested in finding her birth father, and began her own online search. She reached out to Dave on Facebook. It would be months later before Dave would see the message and answer her.

Although he felt in his heart that Mandy was his daughter, Dave knew it was important to have more than just a hunch. He contacted Catholic Charities for help. The Adoption program staff walked him through the steps he would need to take. He decided to come into the office so his identity could be confirmed. He completed the required paperwork to re-open his files. Dave explained that he needed assurance about her identity if he was going to open up and get his hopes up.

From there, the Adoption staff was able to verify that the person who had been in contact with him was indeed his daughter. Dave was filled with emotion, sharing tears with the staff. He was very excited and filled with a sense of relief. Dave is looking forward to exploring a relationship with Mandy, however she wants it to be. Catholic Charities’ Adoption program staff feels blessed to have been a part of their reconnection journey.